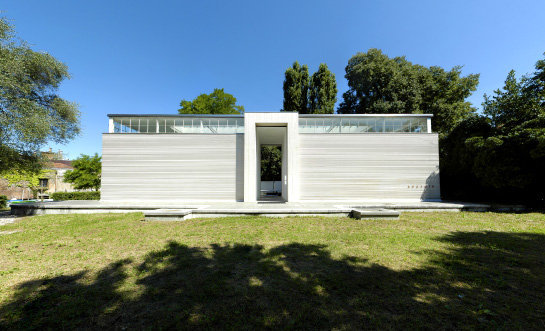 The Austrian Pavilion
The Austrian Pavilion at the Venice Biennale was built in 1934 according to plans by Josef Hoffmann (1870–1956), one of the founders of the Wiener Secession and the Wiener Werkstätte. The clear symmetrical building, conceived as a white cube from the outset, was the first Venice pavilion to have been designed by a leading Classical Modern architect. Josef Hoffmann's last internationally acknowledged building was described in the press as a pioneering modern achievement.

Back in 1910 Hoffmann had also been responsible for exhibition architecture in a context of the Biennale. The Italian jury had invited Gustav Klimt to hold a retrospective show in the International Pavilion as there was no Austrian Pavilion at the time (The Hungarian, Bohemian and Moravian parts of the Hapsburg monarchy had completed their own national pavilions in 1909). Klimt's exhibition combined with Hoffmann's design were a major sensation.

The Hoffmann pavilion was not used following the annexation of Austria by the Third Reich in 1938, nor in the subsequent Biennale years of 1940 and 1942. Austrian artists with close ties to the Nazi regime were shown in the German Pavilion. The Biennale was cancelled altogether in the years 1944 and 1946.

In the postwar years (from 1948 to 1956) Josef Hoffmann adopted the role of commissioner for the Austrian contributions to the Venice Biennale, which was held in the Austrian Pavilion once again.

The pavilion has been subjected to a number of interventions over the years. These interventions included the removal of decorative elements by Ferdinand Kitt on the portal to the courtyard.
In 1984 the 50th anniversary of the pavilion's completion was marked by comprehensive renovation work undertaken by Hans Hollein, during which the original spatial dimensions as well as the entrance situation were restored.